Just as it seemed a risk-on sentiment could return to the broader capital markets, Federal Reserve Chair Jerome Powell had other ideas, sending cryptos in the wrong direction. On Friday, Powell made a speech at the annual economic symposium at Jackson Hole, Wyoming. During the discussion, he warned that the central bank’s commitment to tackling inflation could cause “some pain” to the economy.

Weighing on cryptos was Powell’s statement that the Fed would “use [its] tools forcefully” to attack inflation. Powell acknowledged that raising benchmark interest rates would likely cause slower growth and softer labor market conditions. However, he stated that “a failure to restore price stability would mean far greater pain.” That’s sound wisdom but it wasn’t what the capital markets were looking for.

Moving forward, it may not be the time to go all-in on cryptos since more volatility could be lurking. Still, it may be a good idea for long-term investors to buy some coins and tokens on the dip.

Over the weekend, Reuters noted that Bitcoin (BTC-USD) dipped below the $20,000 level, a key psychological threshold. Remember that the prior bull market cycle culminated with BTC over $65,000 before tumbling back down into the weeds.

Even though BTC has today again  fallen below the crucial 20K level,  stubborn bullish investors could still rush in to buy it in the days ahead. Therefore, BTC being bid up to 21K or 22K isn’t out of the question. On the other hand, with bears smelling blood, Bitcoin may drop further before it rebounds.

Nevertheless, the breaching of this critical threshold represents a significant pivot. With the Fed essentially committing to an aggressive monetary policy, BTC might not have enough oxygen to swing higher. As other risk-on assets fade, it’s possible that even long-term believers will lose their nerve.

However, if you’re looking to acquire cryptos bit by bit, I suspect that BTC will dip down to 18K to 19K territory soon. 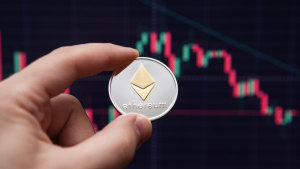 Currently, the news cycle for Ethereum (ETH-USD) focuses on an event called the Merge. Up to this point, Ethereum’s consensus mechanism ran on a protocol called proof-of-work. Essentially, the privilege of verifying transactional data in exchange for ETH cryptos aligned with raw computing power. The more power that was present, the higher the probability of election.

Ethereum’s project leaders now want to pivot to proof-of-stake, which incentivizes stakes in the network as opposed to computing power. While proof-of-stake features much higher energy efficiency, it also presents risks.

Additionally, the Merge represents a well-known, fundamental catalyst. Therefore, I’m concerned about the “buy the rumor, sell the news” effect. As well, given the Fed’s hawkishness, investors should watch for ETH to dip to around the $1,000 level.

With Powell sucking the air out of risk-on assets, there is reason to be skeptical about all cryptos. Even supposedly safe-ish assets like stablecoins (which are digital assets pegged to the dollar) present concerns. Among them, I have grown increasingly worried about Tether (USDT-USD). While I still own some USDT, I have sold a majority of my stake in it.

While I’ve mentioned this concept many times, it’s worth repeating for the benefit of both longtime and new InvestorPlace readers: In the world of cryptos, investors have little to no recourse. Basically, the decentralization that seemingly everyone loves about digital assets also brings problems of accountability (or lack thereof). Unfortunately, you can have full decentralization or full accountability, but you can’t have both.

Further, no matter what your opinion of USDT is, you should consider its trailing one-month performance. While Tether noticeably dipped from $1.0002 to $1, a competing stablecoin — USD Coin (USDC-USD) – which I also own – has largely stayed level over the same period.

USDT’s retreat may may mean nothing, but I’d still be careful of it. 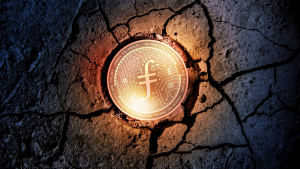 To be blunt, the teasing nature of cryptos can be awfully discouraging. Yet again, the sector finds itself swimming below the $1 trillion market cap line. However, the downturn is also an opportunity for patient, long-term investors to gradually pick up some digital assets on the cheap. Gradually is the key word, as more pain could follow for the sector. However, with that caveat out of the way, investors should put Filecoin (FIL-USD) on their radar.

A blockchain cooperative, Filecoin fosters an economic ecosystem that brings service users and providers together. Specifically, the underlying platform is  a cloud-based storage system. Unlike other competing systems, Filecoin encourages grassroots participation.

Rather than a giant technology conglomerate owning the network, each Filecoin participant offers unused storage to the system. In exchange for their space, they receive FIL coins.

What I like about Filecoin is that it features a specific directive. You don’t hear Filecoin advocates talking about addressing global hunger or curing cancer. Instead, it has taken a common functionality in the mainstream – cloud storage – and decentralized it.

Before I get into  the ultra-anonymous blockchain, Monero (XMR-USD), and its associated reward coin, please understand this point: If you invest and/or trade in cryptos, you must pay taxes according to the laws of your jurisdiction. And if you’re an American (most of you are), believe me, the IRS doesn’t mess around.

Interestingly, the U.S. tax agency may add more agents to its roster. The Inflation Reduction Act appropriated nearly $80 billion of additional funds to the IRS. Supposedly, this figure will in part “boost enforcement measures to collect unpaid taxes from wealthy Americans.”

Interestingly, Monero  has held up better than most  cryptos recently. That’s really not surprising, since Monero specializes in facilitating private and anonymous transactions. Moreover, the IRS issued a bounty for anyone who could crack its blockchain.

From what I understand, the tax agency is still seeking an answer to the Monero problem. Therefore, due to the likely interest that some unsavory people likely have in it,  XMR could be an interesting name to pick up for terribly cynical reasons. 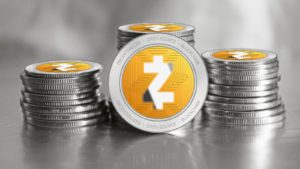 Amid the renewed interest in anonymity, Zcash (ZEC-USD) may represent an intriguing pickup among deflated cryptos. For one thing, ZEC’s market performance has been rather solid recently, even as many major virtual currencies have struggled.

However, there may be a fundamental reason for Zcash’s resilience. According to Coinmarketcap.com, Zcash “allows for a level of privacy unattainable with regular, pseudonymous cryptocurrencies,” such as BTC and ETH.

However, Zcash isn’t quite as shadowy as Monero. Its main emphasis is on fast, secure transactions, aligning perfectly with the mobile revolution. As well, its website states that “Private addresses and transactions can be disclosed by Zcash users for information sharing, third-party audits or to comply with regulatory requirements.”

By mentioning Ethereum Classic (ETC-USD) as one of the cryptos to put on your watch list, I’m highlighting a crypto that could perform either shockingly well or predictably poorly. As you may be aware, Ethereum isn’t the “real” Ethereum. Rather, Ethereum Classic represented the first, true Ethereum blockchain. But to make a long story short, in the initial launching phase, the ETC network suffered a blockchain breach.

Most developers decided to essentially hit the reset button by launching a new platform, ETH. However, many ETC developers decried the move as defeating the purpose of a decentralized ecosystem. In other words, if a few powerful people could just arbitrarily change everything, what would be the point of a distributed decentralized consensus mechanism?

Now that that the ETH network stands poised to shift over to proof-of-stake, it will have another distinguishing layer against ETC, which remains committed to proof-of-work. In my opinion, proof-of-work presents a fairer and more meritocratic methodology as it encourages people to find creative ways to generate more computing power.

On the date of publication, Josh Enomoto held LONG positions in BTC, ETH, USDT, USDC and ETC. The opinions expressed in this article are those of the writer, subject to the InvestorPlace.com Publishing Guidelines.

A former senior business analyst for Sony Electronics, Josh Enomoto has helped broker major contracts with Fortune Global 500 companies. Over the past several years, he has delivered unique, critical insights for the investment markets, as well as various other industries including legal, construction management, and healthcare.