The Ethereum blockchain network is all set for the much-awaited Merge event expected in about 48 hours. On Monday, September 12, derivatives marketplace Chicago Mercantile Group (CME) announced the launch of ETH options trading for its ETH futures products.

As market participants anticipate the upcoming Ethereum Merge, a potentially game-changing update of one of the largest cryptocurrency networks, interest in Ether derivatives is surging. The launch of our new Ether options contracts is particularly well-timed to provide the crypto community with another important tool to gain access to and manage exposure to ether.

Our new options contracts will also complement CME Group’s Ether futures which have seen a 43% increase in average daily volume year over year.

The CME Group has been very active in the crypto derivatives market for nearly five years now. It was the first to launch the Bitcoin futures product back in December 2017. During the second quarter of 2022, CME’s ETH derivatives contracts saw record-high interest rates despite the crypto winter.

The Ethereum Developers have been gearing up for the Merge event scheduled on September 15. As per the “Ethereum The Merge Countdown” data by OKLink, the Merge progress is already 99.74 percent complete. 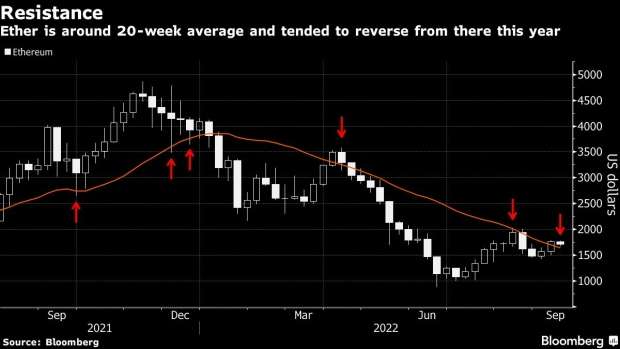 The Ethereum (ETH) price has already been corrected by more than 13 percent over the last month. Many market experts believe that the Merge event could be a “sell-the-news” event for Ether.

On the other hand, Ethereum investment products witnessed strong outflows to the tune of $62 million last week. This alone accounted for a bulk of cash pulled out of digital assets. In his latest blog post, James Butterfill, head of research at CoinShares, wrote:

This was “despite the improved certainty of the Merge and perhaps highlights a concern amongst investors that the event might not go as planned”.

Also, in the derivatives market, a large number of traders are shorting Ethereum ahead of its biggest technical upgrade. Chris Weston, head of research at Pepperstone Group Ltd., wrote:

“From a short-term trading perspective it feels like the weight of evidence is that traders are far better off watching variables such as liquidity and sentiment over the switch to ‘proof of stake.’”