Monthly sales volume on the largest NFT marketplace, OpenSea, plunged to $700 million in June, down from $2.6 billion in May and a far cry from January’s peak of nearly $5 billion.

By late June the average NFT sale sunk to $412, from $1,754 at the end of April, according to NonFungible.com, which tracks sales on the Ethereum and Ronin blockchains.

“The crypto bear market has definitely had an impact on the NFT space,” said Gauthier Zuppinger, co-founder of NonFungible.com.

“We have seen so much speculation, so much hype around this kind of asset,” he added. “Now we see some sort of decrease just because people realise they will not become a millionaire in two days.”

The NFT market has collapsed along with cryptocurrencies, which are typically used to pay for the assets, at a time when central banks have jacked up rates to combat inflation, and risk appetite has withered.

Bitcoin lost around 57% in the six months of the year, while ether has dropped 71%.

For critics, the crash confirms the folly of buying such assets, tradable blockchain-based records linked to digital files such as images or videos, often artwork.

The Malaysian businessman who bought an NFT of Jack Dorsey’s first tweet for $2.5 million last year struggled to get bids of more than a few thousand dollars when he tried to re-sell it in April.

But Benoit Bosc, global head of product at crypto trading firm GSR, sees the downturn as the perfect time to build a corporate NFT collection – the crypto equivalent of the fine art traditional banks display to impress clients.

His purchases include an NFT from the Bored Ape Yacht Club, a set of 10,000 cartoon monkeys made by US-based company Yuga Labs and promoted by the likes of Paris Hilton and Jimmy Fallon.

Such is the hype surrounding Bored Apes that Yuga Labs raised $285 million in April by selling tokens it says can be exchanged for land in a Bored Apes-themed virtual world it has not yet launched.

Yet the average sale price for a Bored Ape tumbled to around $110,000 in June, having halved since its January peak of $238,000, according to market tracker CryptoSlam.

In his New York office, Bosc put up three screens on which to display his NFTs, which include various pixelated characters and a Bored Ape bought for $125,000.

“For us, it’s also a brand exercise,” Bosc said. Owning a valuable NFT and using it as a profile picture on social media is a way to establish “respectability, authority and influence” in the crypto sphere, he said. 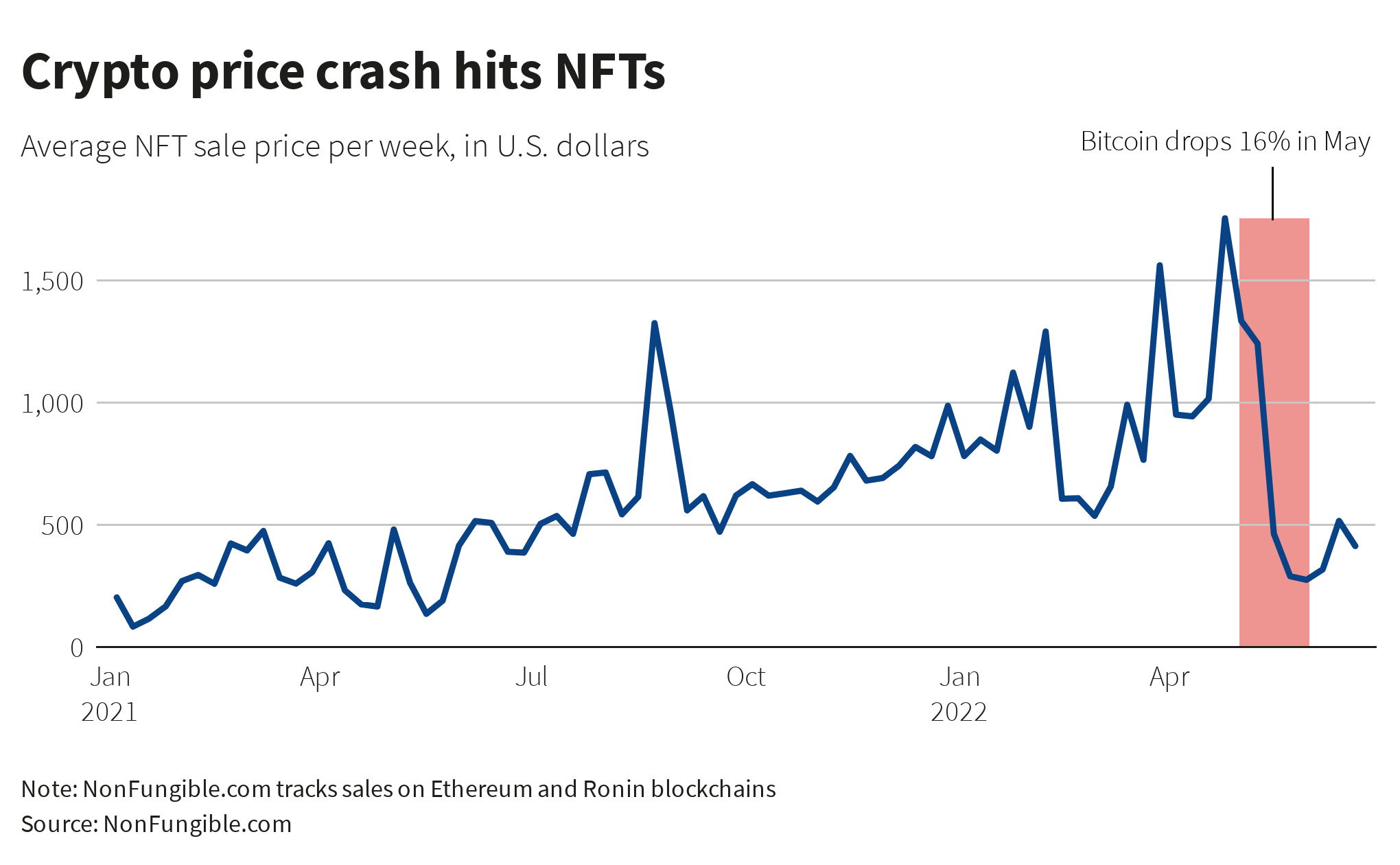 Nonetheless, the future of NFTs is distinctly uncertain, as the era of low interest rates which encouraged investors to take risky bets comes to an end.

Some market watchers say the influence of NFTs on the art market will shrink. Meanwhile, even though the much-hyped vision for a blockchain-based metaverse hasn’t materialised yet, enthusiasts expect NFTs to shake up the gaming industry, for example by allowing players to own in-game assets such as avatar skins.

“Everyone believes games are going to be the next big thing in blockchain,” said Modesta Masoit, chief financial officer at blockchain tracker DappRadar.

This risky combination of gaming and financial speculation may face difficulties, though. Most gamers prefer games which do not include NFTs or “play-to-earn” components, according to John Egan, CEO of technology research firm L’Atelier.

Meanwhile, the biggest NFT-based game, Axie Infinity, has seen its in-game token collapse to less than half a cent, down from a peak of 36 cents last year.

For L’Atelier’s Egan, the NFT market is unlikely to recover in its current form.

“Ultimately it’s a situation where extraordinary amounts of money are being paid for extraordinarily limited assets that don’t really produce any cash flow,” he said.

But the underlying concept of creating unique digital assets is still “fundamentally important” and will have “massive applications” for the financial sector in future, he said. 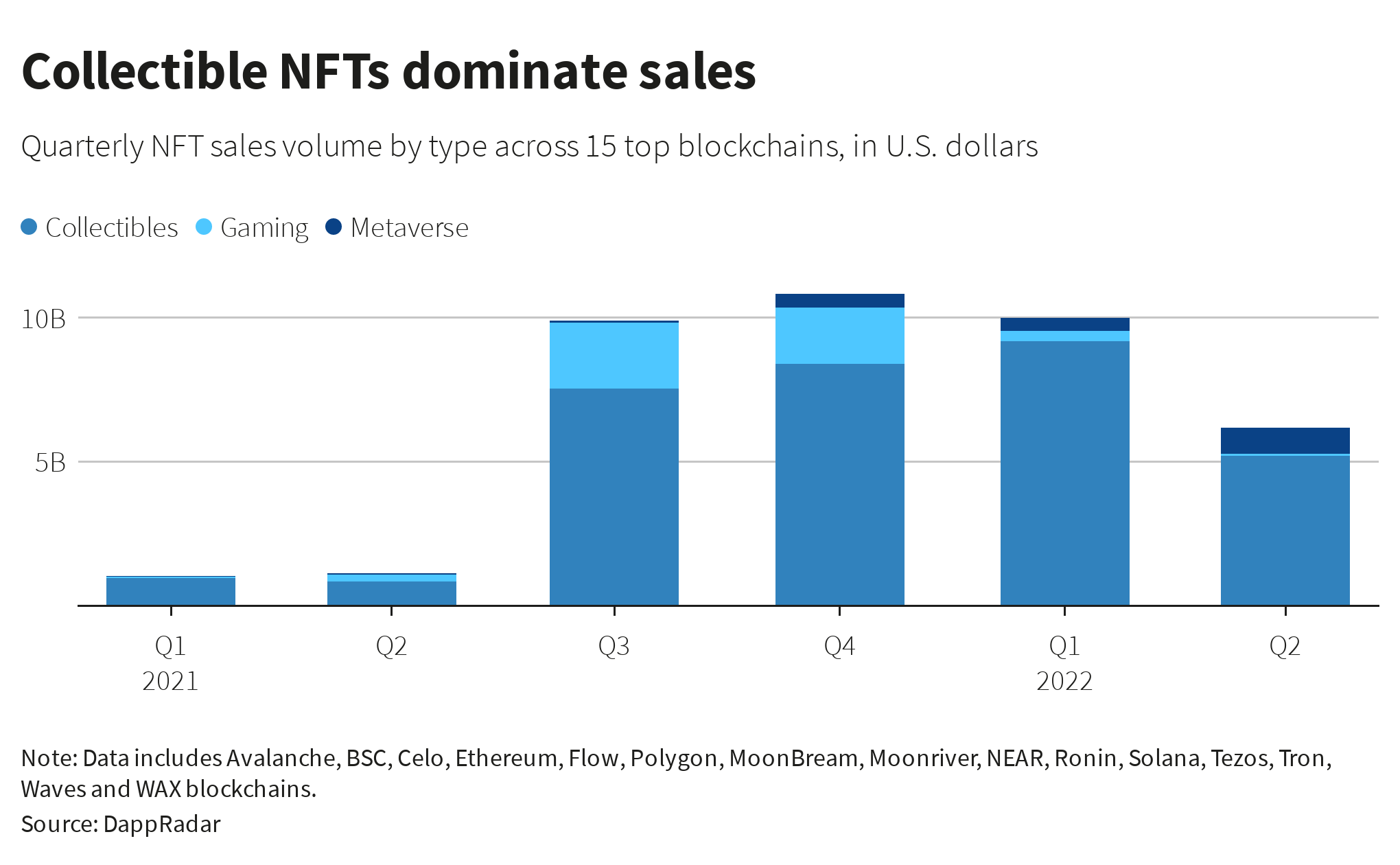 Sean O’Meara is an Editor at Asia Financial. He has been a newspaper man for more than 30 years, working at local, regional and national titles in the UK as a writer, sub-editor, page designer and print editor. A football, cricket and rugby fan, he has a particular interest in sports finance.